This month, Anja Brinkmann and I went to the Dalí Museum in Figueres, Spain. We hired a car and drove north from Barcelona. We were both excited to see the museum. Having wound our way through the tiny streets of the old town center, there were the unmistakable eggs sitting atop the museum.

Having seen many photos of the museum, there were many moments of aha, so that's where that feature belongs. Entering the museum, you are greeted by Dalí's raining car, however it is not raining. To my disappointment, I discovered that you have to put money in a coin slot. This was the first of several instances in the museum where things are coin operated, "Avida Dollars!".

Mounted on the bonnet of the car is a grandeouse sculpture that Ernst Fuchs cheekily gifted Dalí for his museum. But Dalí was the master and had a surprise install for Fuchs. At the grand opening of the museum, there was his sculpture perched on bonnet like an ornament. 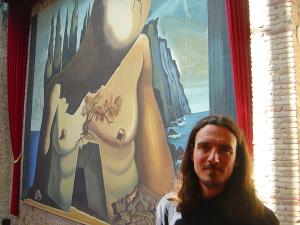 Scattered throughout the museum are a number of his famous works, but also many others that I found of little interest. As a painter I guess I'm biased. As a lover fine painting, I guess I'm biased again. So it was with great interest that both Anja and I studied his most famous paintings. What surprised me, was how small these paintings are. A few years ago in Berlin, I saw Dalí's famous melting clocks, "The Persistence of Memory". It was tiny! So I've come to realize that finer works are usually small and the larger somewhat more rough or simple.

His Sterogram paintings were fascinating to look at, and did create a great sense of depth. There were numerous examples of these about the museum. I was wondering how he chose the colours to created the depth illusion.

At the end of it all, I felt like there was something missing. After being so privileged to have meet so many superb and talented artists in the recent years, and then visit them in their studio, I realized that this was not possible with Dalí. But on our last round of the gallery we did find his tomb in the basement of the museum. So he was there, but not there.

After a very late lunch, we then drove to Port Lligat (Cadaques) to see his home. After travelling on the "senic route" to Port Lligat along winding hillside roads, we arrived rather late, just as his home, now a museum was being closed. The only residents to be seen were the multitudes of cats. I could instantly see what attracted Dalí to Port Lligat. Beautiful clear water in a protected bay, and very secluded.

And so ended our Dalian journey, from the outside of his house we looked at the garden walls and could only wonder and imagine at the parties and visitors that came to see the grand surrealist.