We spent a couple of days in Oyamazaki, a little town outside of Kyoto. Here began the culinary experience that Japan is, and a taster of the days to follow. It was such a treat to be taken care of by Shoji Tanaka, he would find interesting restaurants for us to dine at. Not only is he a lover of fine art, but also of fine food. He continued our culinary education while we stayed in Kyoto. 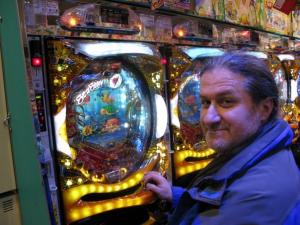 Luigi was very happy when he discovered a Pachinko parlour in Oyamazaki. These places are a mad sensory overload of something similar to poker machines halls. The noise and flashing lights did not seem to bother the regular denizens of these establishments, although the strange foreigners staring and taking photos did make them look around, even if briefly.

Kyoto is renowned for its old world charm, a Japan that no longer exists. It was spared the devastating bombing during the war. There is still much modern development in the city, and you will often find an old shrine sandwiched between two buildings. There are still palaces and over abundance of temples in explore. It makes for a truly fantastical city to visit, with a culture that is so different from that of the Europe.

To our good fortune, the IFAA exhibition had been planned to coincide with the cherry blossom season. Many tourists, both foreign and Japanese come to Kyoto at this time as the city becomes even more beautiful. Many Japanese ladies also don traditional Kimono to walk about the city.

The exhibition was situated in one of the popular quarters of Kyoto at the Dohjidai Gallery. Everybody was very organized, with the exhibition of 41 artists being hung in a few hours without any fuss.

The standard of artwork was very high, with styles and techniques being quite varied. I saw many beautiful works of art hung there. The IFAA had also printed a very handsome full colour exhibition catalogue which looked very professional.

Also exhibiting was Satoshi Sakamoto who I had met over the internet. As his English was the best of all of the artists, it was also his task to be our translator and guide. Before we left for Japan, he had said to me, “We can enjoy misunderstanding”.

Indeed we did have a very enjoyable time. Satoshi became a very good friend and we had many interesting and philosophical discussions with him. The writings of Rudolf Steiner has been a great influence upon him and his work. He has a very philosophical bent. But it wasn’t all serious talk as he is also very sharp witted and could make both English and Japanese speakers laugh.

We had a number of interesting visitors to the show. But of special note was a curator from the Hiroshima City Museum of Contemporary Art. He was currently doing research in to Fantastic Art as he was planning an exhibition in the near future. Otto Rapp has found through his research and conversations with Rudolf Hausner, that there has been a long association with Vienna Fantastic Realism in Japan. He has written a rather extensive essay which in part brings some light to this.

Luigi also explained to me that in his time studying under Rudolf Hausner at the Akademie der bildenden Künst, there were a number of Japanese students. To his great surprise, one of these students and a then good friend of his, Mr Aramaki, visited the exhibition. They had lost contact with each other since they both left university. So here again was another small world experience.

There was no exhibition opening party, but there was a finissage (closing party). I don’t know if this is typical of Japanese exhibitions. On the preceding day, Luigi, Shoji, Satoshi and myself made our way to a radio station were we gave a brief oversight of the exhibition on an arts program.

From the beginning to the end, Shoji had done a wonderful job of organizing the exhibition and taking care of us.

More of the exhibiting artists had travelled to Kyoto to attend the finissage. It was nice way bring the exhibition to a close. While we had only been there for a week, we had made new friends and made many new experiences. It was a little sad that our adventure was coming to a close.

The next day we were on our way to Osaka to catch our flights. Here we bid our farewell to Shoji. He promised to visit us later in the year. Luigi was the next to leave as he had an early flight. Anja and I had a much later flight and so we joined Satoshi to seek out artworks of one of his favourite Fantastic painters, Di Maccio in of all places an Onsu (a public bath and sauna).

In the 1980’s Japan’s businesses were making ridiculous amounts of money because of an extremely strong Yen and a booming economy. This led many investing in large art collections. In this case very large artworks. These were hung in the relaxation lounge for viewing after your sauna and hot bath. So the only way we could see these artworks, was of course to go to the sauna. Life can be so hard sometimes. We spent a good hour relaxing in the lounge appreciating Di Maccio’s colossal paintings in our funny yellow or blue pyjama like attire that is made available to guests.

But time was up, we were due to make our way to the airport. We bid our farewell to Satoshi at the train station after he made sure we were heading in the right direction. It was only recently that Satoshi told me of the realization that came to him as we left, “that everybody around him was Japanese”.