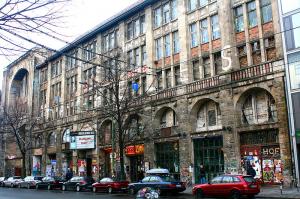 When I first came to Berlin, I set about finding where action in the art scene was. I soon discovered a problem however. I was about ten years too late. Everybody had stories of how things were and seemed a little depressed, if not nostalgic for the heady days after the fall of Berlin Wall. There were however a few lingering corners of memorabilia clinging to Berlin like chewing gum stuck to your shoe. And just like the chewing gum, they’d been chewed up and spat out and trodden on, being devoid of their original colour and flavour.

While this all might sound rather depressing, it was rather fascinating to seek out other people’s Memory Lanes, especially for an Antipodean whose own state of origin roundly frowned on any independent art scene that got too big for its boots and would be soundly rounded upon by the local authorities for being a hotbed of radical subversive activities. One of those Memory Lanes led me to the legendary Tacheles. A large dilapidated disfunctional building which was in the center of a post Cold War Berlin art vortex of near anarchy where being radical and subversive was the norm. In short a dreamland that was a world away from my overgrown country town called Brisbane.

What was Kunsthaus Tacheles then? A former department store, then SS headquaters, a prison for French war prisoners, various offices during the DDR (GDR), neglected, partially demolished and then housing a self-organized collective of artists on Oranienburger Straße in Berlin-Mitte. One could question if the collective is indeed self-organized. There used to be all manner of events and parties hosted in the building and a constant stream of artists coming and going, some leaving there mark around the complex such as with the sculptures in the empty space behind the building. Today it is mostly the street “artists” leaving their marks on the walls with their graffiti.

I met a few people who had studio spaces in the building, and came to know one artist in particular. And so I came to be informed of all of the internal strife that forms its colourful history as an artists studio complex. I tried for a while in vain to land myself a studio space there, but in the end gave up, as I discovered a more lively scene over in Friedrichshain that was not the focus of morbid tourist curiosity.

Since 2003 when I first explored it, little seems to have changed. Strife still abounds as the collective is trying to secure their future in the building by purchasing it from the owners, with whom they’ve had a very rocky relationship.

The collective is seeking €3.5 million in funding. However, there does not appear to be any suggestion of where that is coming from. There is also a dispute over the status of the lease since the beginning of the year.

Although I rarely go to the Tacheles these days, I would miss a place that has become part of my own Memory Lane.