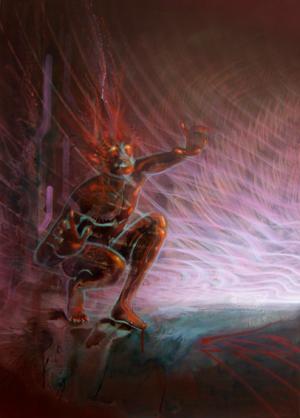 After attending the exhibition openings for my recent exhibitions at Galerie III in Barmstedt, I stopped off in Hamburg to visit fellow visionary artist, Dennis Konstantin. I had become aware of Dennis some years ago on the internet while previously living in Berlin. But I never made it to Hamburg to visit him. It was at the Galerie III exhibition that we finally met face to face. He has his studio in the Karolinenviertel which neighbors the famous Schanzenviertel in St. Pauli, Hamburg. The neighborhood is just like a slice of Berlin’s Kruezberg where I had previously lived, so it felt very familiar. However when Dennis and I went for a jaunt through this “alternative” quarter, I realized very quickly how small it all was, and just how lucky we are in Berlin to have so much.

While Hamburg has Altbau houses (late 19th to early 20th century) also, they don’t seem to share the same spacious layouts the Berlin houses do, being more akin to those in Vienna. Berlin’s also have large inner courtyards that the others lack. Dennis lives and works in one of these old houses.

While in his studio I looked out through the window across the small lane to the next house, and exactly opposite his studio was another artist working in her studio. So while Dennis may live alone, at least he does not have the feeling he works alone.

The walls of his apartment are crowded with his original artwork. It is a true feast for the eyes. Even after visiting Dennis two times, there is still much to look at. It is truly fascinating to get up close to his works, as the usual story goes, what you see on the computer screen, in no way can convey how the artwork actually is. His works are very energetic, luminous and otherworldly. Exactly my taste. It was enthralling to look over his should as he worked. His style differs to mine, but the technique is similar, working with underpainting and transparent oil glazes which achieve a luminosity not possible with mixing paint on the palette. A technique which is well adapted to the content of our work.

The themes of our artwork resonate together. We are both interested in the living dynamic of energy that manifests everything around us, our perception of it and ultimately how our consciousness relates to it. This is why we and other artists generally refer to our artwork as Visionary. 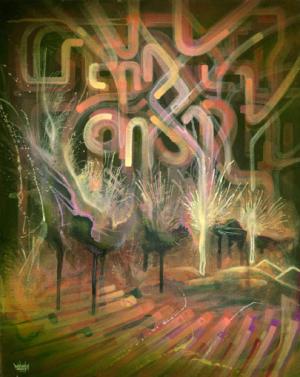 Dennis allows the play of chance to inspire the direction of the painting. At times he will allow the paint to have its way creating its own shapes which then inspire him further. He also uses deft fluid brush strokes to create harmonious patterns that vivify his works with a vital dynamic that glows in his twilight worlds.

He originally studied and graduated as an architect, but chose to be “starving in my own studio than in someone’s office”. In the Autumn of 2003 and 2007 he spent time with Ernst Fuchs learning much from him. He also assisted Fuchs on his Apocalypse chapel in Klagenfurt, Austria.

While in his studio we also swapped stories and various bits of information about the Fantastic Visionary network of arts. We also discussed the idea of uniting forces and organizing a group show. There is much happening on the West Coast of America and we both feel something needs to happen here. For now, it is a matter of watch this space. If any one should have suggestions for places to exhibit, please let us know.

As is often when I visit friends in theirs studios, I get itchy fingers and also want to be working away. Visiting Dennis was no exception. It is very inspirational visiting him. And so it came time for me to depart to my own studio in Berlin.