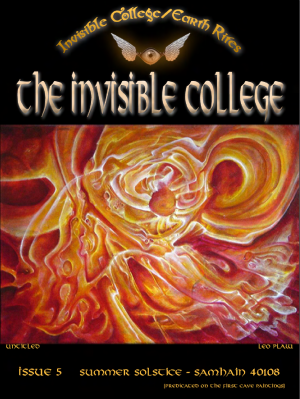 My artwork was recently featured in the publication Invisible College. It also includes a three page interview and my artwork on the front and back of the magazine. This is the fifth edition of the magazine. Previous editions have featured Marina Hoffmann, Roberto Venosa, Andrew Gonzalez and Maura Holden. Also included in this edition is the artwork of my good friend Amanda Sage. The magazine looks just fantastic. I had already purchased edition 4 which featured Maura and had been aware of the magazine for a while. So it was a great surprise and honour to be included.

Invisible College is a full colour magazine edited by Gwyllm Llwydd. In his own words:

“The Invisible College was born partly out the urge to communicate about the emerging cultural forces of our times, and to anchor these cultural groups into perspective within the continuum of the twin streams of the Bohemian & Acadian memes. The magazine came into being about 2.5 years ago.There seemed to be a serious gap in the magazine/journal world for publications that was tracking and recording what has been evolving in the world of arts and consciousness.

The motivation was to shake the tree a bit, and get the coconuts to start falling. What The Equinox did for London in the teens of the 20th century, and what the underground press did for the US, Europe, & Australia in the late 50’s through early 70’s, and what the zines did in the 80’s and 90’s, we wanted to do for the new century. We were motivated by the examples of Mondo 2000, The Oracle, Oz, the publishing of Little Caesar Magazine & Press… and many more publications that stimulated vast creative changes in society.

We wanted to present art, poetry, tales, interviews and reviews in such a way to lift consciousness, and to engage the reader to consider alternatives to the current cultural systems that have now peaked and are now in decline. As artist and poets have been in the forefront of the various struggles and movements in society from time out of mind, journals and magazines in recent centuries have become an important part of the documenting process and have served as a focal point and organizing organ of the various aspects of what seems to be transpiring in current times.

The Invisible College evolved out of Earthrites.org and my blog, Earthrites.org/turfing. There was a prototype magazine being developed on ER, and Turfing was/is a running social and arts commentary blog. Someone… Roberto Venosa, or maybe Martina Hoffman or maybe Mike Crowley suggested that I consider doing a pdf magazine. After 2 issues of that, we went into printing via Lulu.com. It came out rather rapidly at first, and now has slowed down a bit. We are going to keep going with the print on demand situation until we can find funding to print. We have had some amazing artist, poets and writers grace the pages of The Invisible College… You can go to the Invisible College web page for the PDF versions or order a printed copy of The Invisible College from Lulu.com.

People’s reactions have generally very good. Some people want the online version in html. I understand that pdf’s are a pain, but it is absolutely free via pdf… The printed version gets rave reviews. It is pretty intensive visually. We are in the process of starting a publishing house, for poets, artist and malcontents, dreamers and drummers of various stripes. Here is to the r/evolution in your consciousness, where ever you may be.”

16 comments on “The Invisble College”

1 Pings/Trackbacks for "The Invisble College"