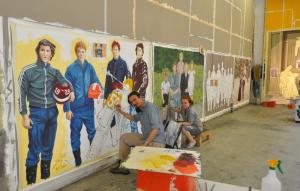 Iza and I at work on the canvases.

This Summer I was called up to work on a mural project that would ultimately span two cities. Work on the project was conducted in the large warehouse studios in Lyon and then completion was on the fringe of Berlin at Teltow.

The project was managed by Creative Stadt, the German arm of the French company Cité Création. Since its inception in 1978, Cité Création has created over 470 monumental frescoes all over the world. These trompe-l’oeil frescoes are designed to enhance urban environments that otherwise have little appeal. Cité Création which started out in Lyon and have since adorned many building walls about the city. Many of the murals now feature in Lyon tourist guides and form an integral of its tourist attractions. While I was there I took the opportunity to explore the city and see some of these previous projects. 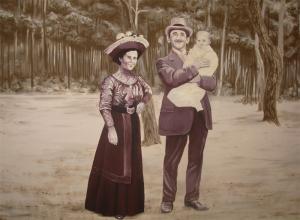 The first canvas I worked on.

I along with Izabela Nowak, were flown from Berlin to Lyon where we worked in a large warehouse through heat that I had not known since Australia. There is definitely a climate difference on the other side of the Alps. All of our co-workers were French. All had a better command of English than I of French, regardless of their protests about being unable to speak it.

It was a very interesting time being in Lyon, although after a long day in the hot warehouse, the only time I had to explore Lyon was on the weekends. I think old Lyon city would have been quite pretty until the 70’s when they built freeways along the river front and through Perrache. But some of the city’s charm was still intact. When visiting the Roman amphitheatre atop the hill, I wondered how often bored Romans might have been looking at the splendid view rather than the entertainment on the stage below. Shopping on the Perrache markets on Sundays was fun. Trying to purchase things when you don’t speak the local language is always entertaining. 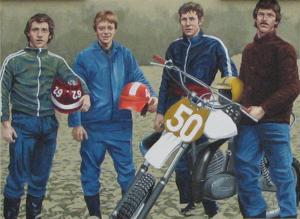 How did this mural project work in two cities? Well, we were painting very large canvases that would eventually be glued to the walls of a building in Teltow. So when we were done in Lyon, a week or so later in Berlin I was busy climbing scaffolding and gluing canvases to the wall.

Working on the murals was quite interesting because the technique I normally use for my paintings is not what applies to this sort of work, when the artwork is many meters high on a wall. So you have work with the thought in mind that the final work will be seen from quite a distance. Colours and details have to be emphasised so as not to be lost. Sometimes, certain details have to be left out all together, as they will be lost or not contribute to the overall story that the mural is meant to convey. I very much enjoyed looking at how my French co-workers painted. 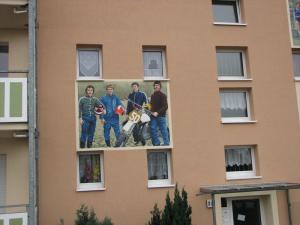 One of the canvases finally in place.

I’ve since had the pleasure to see some of their own personal artwork, and it usually bears no relationship to what they paint for Cité Création. It was also interesting talking to them as artists and we all understood each other quite well about the trials and tribulations thereof.