Stephen Colbert of “The Late Show” demonstrates how ridiculous this censorship can be. 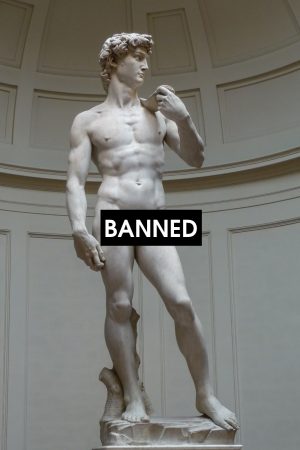 The problem exists for living artists, as well as those represented in museums. A number of artists I know have fallen afoul of this small mindedness, had their accounts suspended as punishment, and then re-enabled under threat of swift retribution should they cross the imaginary line again.

Why does it matter? Social media sites such as Facebook, have such a strangle hold on your access to your own audience, that should they see fit, and turn the lights out on your profile or page, that’s it, the show is over, as you won’t have access to the contact details of the majority of your fans.

A large part of the problem lies in the existing culture of today, where you are forbidden to offend anybody, intentionally or unintentionally. The artists I’m talking of have Facebook profiles in the order of hundreds of thousands of fans who love their work. Yet it all it takes is one disgruntled prude, or some one with spiteful intent to make a report, and BAM! you’re profile is down.

What are the alternatives or options? Few, and none with the reach. Investing time into getting your social media fans to subscribe to your newsletter should be a priority, even if you’re not being banned, even internet giants topple and die (MySpace).

The final option would be to a willingness to try other social networks, such as SteemIt, and see if it reaches the critical mass to make the likes of Facebook dispensable.

As for the broader social issue of people’s immaturity, that one is a long long wait. Given that world is going through rapid changes today, it’s hard to say how the story will unfold. But, by not surrendering to the Prude Police, we may keep the world alive and vibrant with different ways of looking at things.