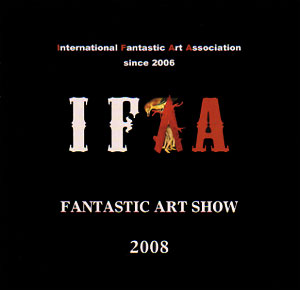 To the outside world, Japan has long had a reputation for being fascinated with the strange and bizarre. Japan has always loved Fantastic Art since the Ukiyoe era. In 1965, a japanese poet, Shuzo Takiguchi was the first to introduce Surrealism to Japan. He used to be in contact with Salvador Dali and is also found in Andre Breton's dictionary of Surrealism. Many Japanese visionaries were taught by him.

Five years ago, Japanese artist Shoji Tanaka discovered the Society for the Art of Imagination (AOI) and then later Beinart.org. It was at that time that he put together IFAA believing that they needed something else than just galleries, as in Japan there are few Fantastic Art galleries. But the few do that do exist do have good collectors and many fans.

Most Japanese Fantastic Artists are isolated and work on their own, and have no network. Hence there was the need to create the association. The Association's members are mostly younger artists as the older artists are not so inclined to network. It is believed that there are many Japanese artists working in the Fantastic, Surreal and Visionary genres and the IFAA wants to find them.

The Association's priority is its yearly exhibition. To date there have been three shows (2006, 2007, 2008). The Association also invites one or two foreign artists each year to exhibit with them, with the intent to build international relationships. Websites such as those of AOI and beinArt.org have shown us the wealth of talent that exists in the world.

The IFAA also have a website http://ifaa.cc/ifaa/. The web site is progressing and they hope to update it by the end of the year in Japanese and English.

Posts on the IFAA