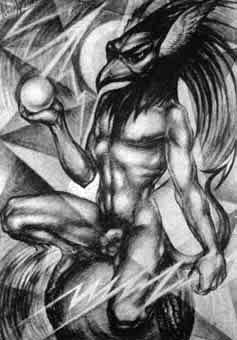 I made wrote an entry for the Fantastic Visions website on one of my favourite artists, Rosaleen Norton, the “Witch of Kings Cross”.

She was my original inspiration to render my visions. She had awed me content of her work, and the deep understanding it expressed. I had originally read an article about her and a review of the biographical book “Pan’s Daughter”. I sought the book out and avidly read every page. My only disappointment was to discover that she had died some year before. I then sought out the book “The Art of Rosaleen Norton” that was mentioned in the biography.

I had found it in the rare books collection of the Queensland state library. I even had to wear white gloves to handle it! It was a wonder to behold, and I wished I could hold on to it. So looking through the book I found the publishers address. Some further searching through the phone book, I found his phone number. And to my great pleasure, indeed Walter Glover still answered that number.

He was a very generous gentleman, and told me a few stories, and also sent me a number of photos of Rosaleen’s artwork. Unfortunately, by the time I made it to Sydney, some months later to collect the books I had ordered from him, Walter had died of cancer. I did however meet and speak with his widow, Enid, who told me, that to her, Rosaleen for all of the media scandle and reputation that surrounded her, was just like any other woman and would engage in quite typical girl talk. Enid also said that she was a wonder with their son.

These pieces of information that she passed on to me, I valued very much, as it told me much about the woman, Rosaleen Norton. It showed me that Rosaleen was also very human regardless of the any of the media, the urban legend or even the very specific view that her biography or her art book presented.