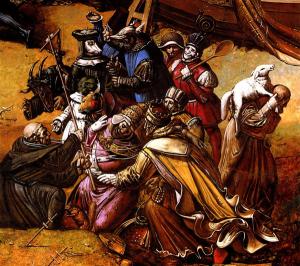 This week I travelled with my girlfriend Anja Brinkmann to the Panorama Museum in Bad Frankenhausen, Germany. I had discovered the museum on the internet, and became interested when I noted some of the artists that had been exhibited there. I was rather excited because the museum seemed to be dedicated to modern painters working in Old Masters techniques. We didn't know what to expect, and had some friends in Weimar try and talk us out of going, and rather go to a contemporary art fair.

To say we were surprised, is an understatement. We were astounded, not by the temporary exhibition, but by the panorama painting that the museum was especially built for.

In in 1976 Werner Tübke was commissioned by the East German Government to create a panoramic painting to commemorate a peasants uprising in 1525. The painting is a gob smacking 14m high by 123m long and an unbroken ring around the circular room. The lighting also heightens the effect of the painting as it towers above you.

On my first casual inspection, it appeared to be only a historical depiction, but then as I proceeded around the room, its detailed splendour unfolded. Tübke spent several years researching woodblock prints from the era of the uprising, and styled the painting after that. He also took inspiration from Hieronymus Bosch and wove fantastical themes and creatures into the extensive work.

We spent four hours at the museum, and most of that time, just looking at the painting. I tried in vain to soak all of the detail. It is a truly overwhelming experience. I've never encountered a painting like it before.

I posted more details about the museum on beinArt.org.