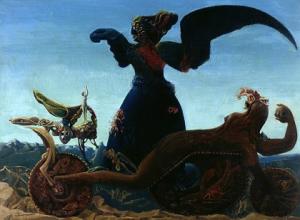 Today Anja Brinkmann and I travelled to Charlottenburg in the west of Berlin to see the “Surreal Worlds”, Scharf-Gerstenberg Collection. The collection is a great surprise and contains many well known names in Surrealism.

Otto Gerstenberg, the founding president of the German Victoria insurance company, assembled a fabulous art collection in Berlin. During the second world war, the collection was stored in a bunker. Much of the collection was destroyed or seized by the Russian Army during the battle for Berlin in 1945.

What remained of the collection was passed to his daughter Margarethe Scharf and, after her death, to her two sons, Walther and Dieter, where it became a starting point for their own art collections. Dieter upgraded the inheirited collection with exquisite examples of surrealistic art by Max Ernst, Salvador Dalí and Rene Magritte, and with works by Odilon Redon, Paul Klee and Jean Dubuffet.

The Scharf-Gerstenberg show encompasses 300 works of “Surrealism and its predecessors,” and has created excitement with its spectacular examples of dark architectural prison scenes by Italian engraver Giovanni Battista Piranesi.

There is also a selection of surrealist films on show, such classics of Surrealist cinema as ‘Un Chien Andalou’ by Luis Buñuel and Salvador Dalí will be shown alongside selected films by contemporary artists.

The “Surreal Worlds” exhibition is not permanent, but is on a ten-year-loan, with conditions attached.  One such condition is that that the artwork does not disappear into depots but remains on display on a permanent basis to the public

The exhibition sports some fine examples of Max Ernst’s decalcomania technique and quite a few Dalí sketches. I found the works of Hans Bellmer exquisite.

The collection is well worth a visit and makes a great change from the dominance of modern contemporary artwork that prevails in Berlin.