Art Universities – the Future of Art? 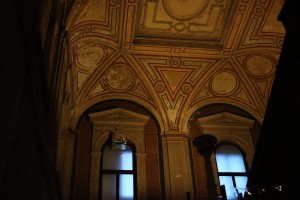 This past weekend I attended the open studios (Rundgang) of the Vienna Academy of the Fine Arts (Akademie der Bildenden Künste Wien). This is the Austrian art academy that produced the likes of Egon Schiele (1890–1918), Otto Wagner (1841–1918), Rudolf Hausner (1914–1995), Arik Brauer (* 1929), Ernst Fuchs (* 1930) and Gottfried Helnwein (* 1948). It also famously twice refused a young Adolf Hitler admission as a student. Who knows how the world might have been if they had accepted him.

While from the outside the main building on Schillerplatz in central Vienna still retains its appearance and charm from the outside, once you step inside it quickly becomes apparent that it is otherwise. Along with thoughtless modern “functional” modifications, the studios are showing the wear and tear of 130 plus years of use, abuse and plain neglect. In the halls where the public are likely to walk, the original decorative works have been kept in order, but step off onto ways more oft tread by students you see the neglect and disdain for the bygone era.

This is what typifies this once grand art establishment. In the unending push to remain abreast with the current art trends, the past is cut off and cast aside as worn out worthless rubbish. That is, unless, it earns some money, like the Painting Gallery, which houses valuable Old Masters artworks from Rubens, Rembrandt, Van Dyck, Hieronymus Bosch and Titian.

What is sad, is that the work that is being produced today in this establishment, is no different from that I have seen in other institutions ten years ago. Contemporary art has become stale and stagnated. Most of the works on display look like last minute afterthoughts, thrown together in a panic before the public arrives in the following days. It also led me to wonder, just what do the students do with their time there, more so the painting students. With the architecture and printing students, it is evident that they do commit time to their work.

The lack of skill, craftsmanship, time and therefore thought is evident in the other works. Penises appeared to be a popular theme amongst male and female students alike. Are they struggling with some sort of erectile dysfunction with regards to finding, firm controversial, ground breaking artwork that provides some penetrating thrust? It appears so limpid that even outright pornography fails to make anyone blink. (Or is this more of a statement on our society today?) I passed one large painting of a graphic homosexual foursome and happened to overhear a woman interpreting the “deeper meaning” with convoluted explanations, of what simply is just a painted copy of a photo.

So it bemuses me to hear people ascribe some greater meaning to something and not call something out for what it is, for fear of appearing “uncultured”, intellectually inferior or closed minded. All I see is the emperor’s new clothes.

But who am I to say what art is or not, what is good art or not? When I start to make such judgements, am I no better than fascist regime of Academy’s most famous reject? I reflected upon this as I walked the halls of this building thinking of how the then regime expunged the “undesirables” from the university. There is tenuous line that one walks when one starts making such qualifying judgements. I think perhaps because of this dark period in Austria’s history, in such institutions, it is anything goes, for fear of being smeared with that taint.

In the headlong rush to forget the horrors and absolve itself of the war, the Austrian nation embraced all that was shiny and new from American modernism, casting aside anything that had a hint of classicism, which had been co-opted and pressed into service of the swastika as any other “resource” was. But then there was the new demon of Communism. They also ascribed to “classical” or technical expressions of art. Therefore, anything that was executed with a degree of skill, or appealed to any sense of ideal or narrative, was seen in the same light and thus doubly “evil”.

Thus we arrive at where we are today. Anybody and everybody is an artist. Anybody that works with a degree of technical skill, can be safely sanitised as “craftspeople”. There is a prejudice that comes with this, implying that one is dull and simple when working with their hands. Why then would you, when we live in this age of technological wonders, work thus, when it can all be automated for you?

Even thinking can be relegated to the great network in the sky. It was thought that with the advent of the internet that we would all become a much more enlightened and tolerant world, when presented with so much information and choice. Rather, what appears to have happened, is that we have largely lost the ability to critically think. Memes sweep the internet, with people forwarding it on, blindly accepting what is on their screens, often not even bothering to click the link, let alone research some other sources to see if the “information” does indeed add up to facts. The 2012 end of the Mayan long count calendar is a case point example.

In this age of manufactured everything, even the artists no longer have to produce their own artwork. Damien Hirst made the claim that he is like Rembrandt. Yet unlike Rembrandt, he does not produce his own artwork. While there is indeed a long tradition of Old Masters having apprentices toiling away on the hack work, the Masters did at least learn their art form first and thereby direct their students. Sadly I think few of the Vienna Art Academy would even be able to do what Hirst would require of them.

Hence there is a “market gap” that is being filled by private art schools. I personally know a Berlin art school (Bildende Kunst und Gestaltung in Berlin) that pick up many students because the official art institutions are not teaching the basic crafts of art production. In Vienna itself there are also traditional options for learning the skills of painting with Michael Fuchs (son of Ernst Fuchs), or in the near future the Vienna Academy of Visionary Art. There are of course, many other schools and artists offering private tuition.

There are art universities that still exist in the world where technical execution still has a place. Unsurprisingly, many are located in those former “evil” Communist countries where traditional skills were still taught and practised. The Leipziger Schule is great example, attracting students from all over Europe. Former DDR professors such as Werner Tübke played a great role in establishing the school as a leading light.

I think where the majority of educational art institutions are wrong in their direction, is their focus on competition. Art students are being processed and manufactured into competitors in the art market. The art market is a direct result of financial speculators looking for something to “invest” their money in without all of the legal restraints that are imposed upon other regulated industries.

In this competitive push that we see everywhere in the world today, quality has suffered, in the name of profit. Whether it be the products we purchase or to our very quality of life that now suffers because environmental abuse, because competition focused on profit come first beyond all else.

Alan Moore I believe has a good perspective on the necessity for skill and craft in our current age.

“Why is the idea of craftsmanship significant at this epochal moment in time? Because it is about shaping our future and the ‘engaged’ craftsman brings the full power of humanity to bear upon their work. Their hand is guided by their eye, informed by their creative mind; their productivity the act of unique creation. Indeed, the master craftsman is adept in using a philosophical framework, as well as tools and materials, to deliver useful things to the world. But more than that, the craftsman must be open constantly to new ideas; they are essentially always in beta. Therefore, we cannot engage with our uncertain non-linear world with the linear and inflexible orthodoxy of logic alone. The craftsman’s critical eye and creative mind is vital to evaluating new possibilities; they must be open to new ideas, information, tools and materials to make things that enable humanity to flourish. This approach is inherently more creative in that it synthesises all aspects of what make us truly human.”

2 comments on “Art Universities – the Future of Art?”