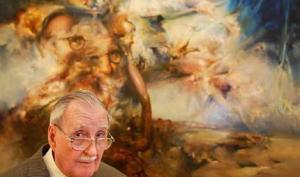 I sadly discovered last night that James Gleeson, Australia’s foremost surrealist painter passed away last month, aged 92. Gleeson was an early inspiration and influence on my own artwork. His visions in paint motivated me to render my own.

I would have liked to have met the man, but I’m told by another artist friend who did, that he wouldn’t talk paint, but if you talked psychology with him, he’d happily talk all day. So it was not so strange then, that before I new this crucial piece of information, and having obtained his phone number, that our phone conversation was very brief, but polite.

Gleeson’s fascination with the burgeoning 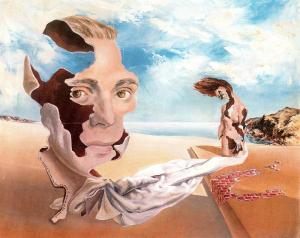 We Inhabit the Corrosive Littoral of Habit

surrealist movement began in the ’30s and continued growing through the ’40s when the artist’s travels took him around Europe, offering opportunities to see first hand the work of Salvador Dali and Giorgio de Chirico. At this time Gleeson became interested in the writings of psychologists such as Sigmund Freud and Carl Jung. These would become major intellectual influences for his art. 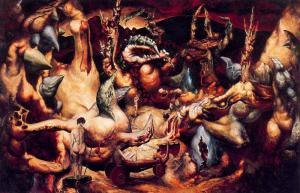 Funeral Procession in a Wounded Landscape

Returning to Australia, Gleeson joined the experimental Contemporary Art Society and began on his own work. Characteristically, his pieces featured naked figures – quite often males – standing out amidst a turbulent background of psychedelic imagery, which often took on the appearance of swirling seas battling even greyer skies. Gleeson’s themes generally delved into the subconscious using literary, mythological or religious subject matter. He was particularly interested in Jung’s archetypes of the collective unconscious. 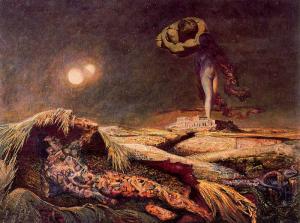 During the 1950s and ’60s he moved to a more symbolic perspective, exploring notions of human perfectibility. At this time he increasingly fashioned small psychedelic compositions made using the surrealist technique of decalcomania in the background, to suggest a landscape, and finished by adding a fastidiously painted male nude in the foreground. Many of his paintings had homoerotic undertones, something which reflected on Gleeson’s own sexuality. The ideas for these compositions also saw Gleeson move into collage with his Locus Solus series, where he produced a substantial body of work by placing dismembered photographs, magazine illustrations, diagrams and lines of visionary poetry against abstract pools of ink. 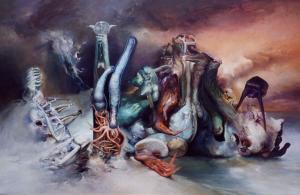 Since the 1970s Gleeson generally made large scale paintings in keeping with the surrealist Inscape genre. The works outwardly resemble rocky seascapes, although in detail the coastline’s geological features are found to be made of giant molluscs and threatening crustacae. In keeping with the Freudian principles of surrealism these grotesque, nightmarish compositions symbolise the inner workings of the human mind. Called ‘Psychoscapes’ by the artist, they show liquid, solid and air coming together and directly allude to the interface between the conscious, subconscious and unconscious mind.

Gleeson’s later works incorporate the human form less and less in its entirety. The human form was then represented in his landscapes by suggestions, an arm, a hand or merely an eye.

In 2003 the Art Gallery of New South Wales exhibited Gleeson’s drawings for paintings. His retrospective in 2004-2005 Beyond the Screen of Sight included 120 paintings and was exhibited in Melbourne and Canberra.

In September 2007, the largest collection of Australian surrealism ever collected was donated to the National Gallery of Australia by Ray Wilson. The collection included various works by James Gleeson.

Gleeson was a member of the first board of the National Gallery and worked hard to develop their surrealist collection. Throughout his life he also worked as an art critic, culminating in definitive histories of fellow Australian artists William Dobell and Robert Klippel. He was also a poet, writer and curator.

Awarded the Order of Australia medal for his services to art in 1975, Gleeson’s talent was undeniable and his effect on the art world ongoing.

“I’ve never accepted the external appearance of things as the whole truth. The world is much more elaborate than the nerves of our eye can tell us.” James Gleeson.