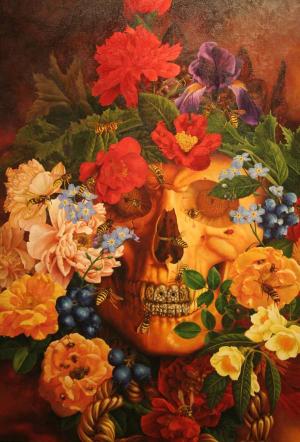 I first met Reinhard Schmid at the Dreamscapes Exhibition in Amsterdam last year. Through our correspondence since then, Reinhard came to invite me down to the opening of the “Dante’s Divine Comedy” exhibition in Viechtach.

Viechtach is a 900 year old town situated in the picturesque countryside of the Bavarian Forest. Some time ago the town of Viechtach decided to put the Alt Rathaus (Old Town Hall) to use as a gallery. Its program of exhibitions have a special emphasis upon Fantastic art. And so the “Dante’s Divine Comedy” exhibition curated by artist and publisher Claus Brusen fitted quite naturally.

The gallery is right on the old town square, which is not surprising since it was formerly the Rathaus. The upper floor of the Alt Rathaus has been superbly renovated as a large professional standard gallery space.

The exhibition looked impressive, with the selection of artwork being of an excellent quality. I arrived early before the throng and so was afforded a good overview of the exhibition. There were quite a few names I was already familiar with. It is always interesting to see new works from them.

Claus Brusen the curator of the exhibition arrived and so I finally met him face to face. There are so many of us now connected via the internet across the world, and it is not so often that we physically meet. However events like Claus’ present an opportunity to make that a reality. Claus generously gave me an exhibition catalog.

With a pen in one hand and the catalog in the other, seeking signatures was a great way to break the ice. Claus was a willing accomplice and directed many of the artists to me. By the time the opening formalities were about to commence I’d already met almost all of the exhibiting artists. There were a couple however that I’d already had contact with, such as Tim Roosen via Facebook and then Olivier Zappelli, a Swiss artist whom I had also met at the exhibition in Amsterdam last year.

The exhibition was officially opened by the Mayor, Georg Bruckner, with Reinhard introducing the artists and Horst Dieter Greyer giving us his philosophical musings on Fantastic art. It was also announced at the opening that the exhibition had already been a success to an extent, having an article with a photograph published in the Süddeutsche Newspaper. This was of special note because it is one of the largest in Germany, and it usually ignores regional events and focuses on Munich.

With the formalities finished, the mass of people which had filled the gallery to capacity on the warm Summer evening were very glad to move again and examine the artworks. Visitors had come from far and wide to see the exhibition.

After having our fill of art, we migrated down to the courtyard for our fill of Bavarian beer and food. Here over drinks and a meal was the chance for the artists to get know each other better. I had the opportunity to meet Ines Scheppach from the Neue Meister group and find out a little more about them as I had seen the group mentioned here and there around Germany. Like Ines, I talked to others and found out more of the state of our Fantastic Art movement.

The night slipped by with the beginning of new friendships and strengthening community. However many had long journeys ahead of them in the morning and so they decided to slip off to the Hotel Schmaus a few doors down from the exhibition where the town council had accommodated them.

In the morning many of the conversations continued again over breakfast. There was a lingering feeling of if only there was a little more time for us all to sit together and talk. A number of us did linger long enough in the day to see the Gläsernen Scheune, a life’s work museum and gallery from Reinhard’s father dedicated to the local Bavarian myths and stories. Those of us left in Viechtach that afternoon then congregated at the Cafe Isis where Reinhard has his Tarot series on display.

I think there will be many more exhibitions such as “Dante’s Divine Comedy” worth the the travel to Viechtach judging by the conversations and the things I saw that weekend. I believe Viechtach’s Fantastic Art project will grow from strength to strength in the years to come as their reputation as a host of professional and high quality events and exhibitions spreads.