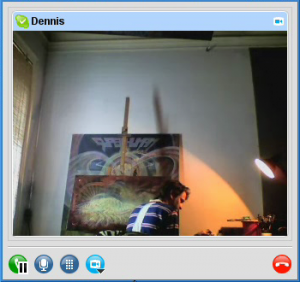 Today I was painting with Dennis Konstantin while he was in his studio in Hamburg and I in mine in Berlin. What began as just a Skype chat moved onto a dual painting session when Dennis picked up his brush and started to work. So, of course rather than just talk about paint, I also continued with my latest work on the easel.

We both continued to occasionally talk when not fully focused on our paintings. What was interesting, was at times glancing back at the computer screen and seeing that the other was doing the same thing, such as sitting and contemplating their painting. It was also an interesting insight into each others studio habits, and how much time is actually spent putting brush to canvas as verses contemplating the next move. It is rather assuring to see that others are also given over to the same foibles.

It would be a wonderful thing if Skype could do multiple video conferencing, then we could have more people involved from all over the world. It’s a nice thought, since painting is usually a very solitary practice. But there are occasions we do all end up in the same physical space. And I certainly look forward to that.