Damask Perfumery – a Sense for Scent 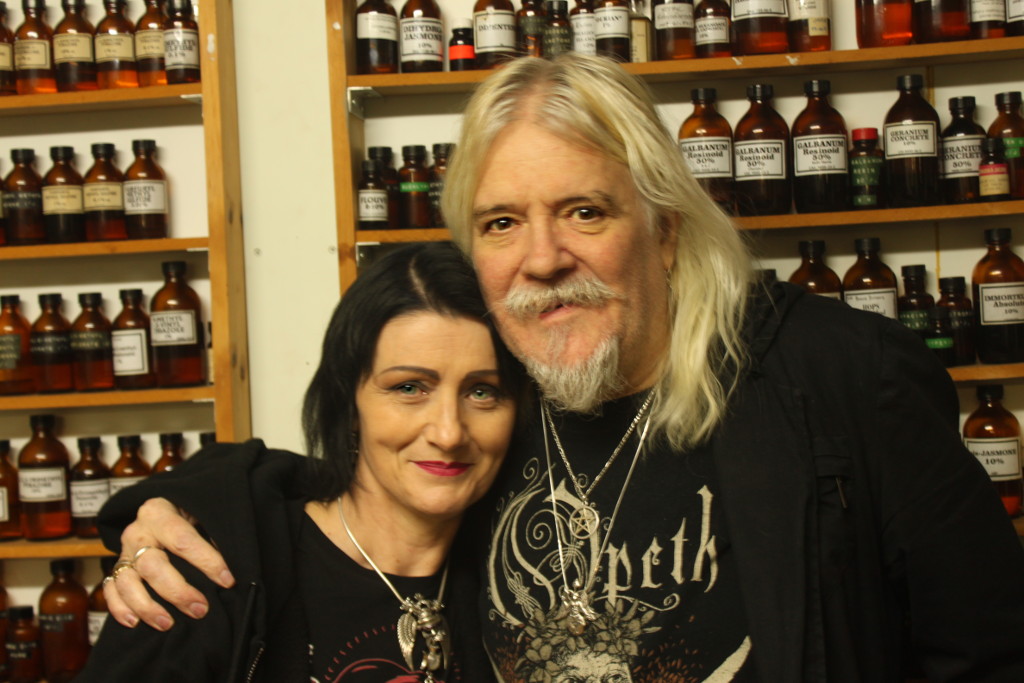 Over the weekend, I visited one Brisbane’s stand out personalities, perfumer, Jonathon Midgley. Together with his partner Gabrielle Ivers, they blend, brew and concoct, some of the most unique scents your nose will ever come to experience.

Jonathon, has been a perfumer, ever since I have known him, in excess of 20 years. We had recently crossed paths again when attending Clairy Laurence’s exhibition. So in the following week he invited me around to the Lab to see what was on the slab.

Actually we were to discuss art and what various connections there might be, since I have been long absent from Australian soil.

His olfactory factory, Damask Perfumery, in Woolloongabba, Brisbane, is where he and Gabrielle work on some very surprising fragrances that you nose might come to partake of. And so I arrived at what from the street, is a most unassuming building that blends in with the rather drab semi-industrial district. The only tell tale signs of anything unusual were the occult symbols marking the front door.

Gabrielle greeted me at the front door along with a strong enveloping warm bouquet that pulled me close into its company. She was in the process of mixing up a volume of concentrated scent for a client.

The various rooms of the Lab were lined with shelves replete with multitudes of mysterious dark bottles, guarding their inner secrets. Jonathon was in the office along with his very large black tom cat, which was adorned with a pentagram collar. Jonathon greeted me enthusiastically, while his cat, as cats are wont to do, was somewhat more cool, but on a scale of cat sociability, welcoming.

So began a long discussion of the state of the arts in Australia and overseas and many an artist to surprise Jonathon with. All the while pungent clouds of scent also joined in on our conversation. How the two of them manage the heady spice that fills the air as they work and not end the day with throbbing headaches is beyond me.

When creating their potions, they work with some very concentrated substances. They explained to me latter, that there are some, should they spill but a drop of them, all doors must be opened and the building vacated.

It is not that the essences they mix and measure are foul odours. Even your most favourite aroma could be overpowering in the right dose.

Later they showed me around their lab stocked with it’s seemingly confusing array of bottles. Apparently it is organized alphabetically like a library. There is also the scent archive of their past projects. There is everything from seductive perfumes, to cosmetic scents, to, would you believe, burps and flatulence. Yes you read correctly, burps and flatulence.

Apparently they were commissioned by Sea World produce seal and dugong smells. The dugong smell was for an model installation where children could press a button and make the dugong burp. Every fifth press would cause it to fart. Great fun for the kids, but not so for those in the Damask Perfumery lab, having to replicate the odour of a lump of dugong excrement. I wondered how they came to mix and match the ingredients.

Would you believe that seal breath smells nothing like fish, but rather like floral black tea? But that is indeed how it smells. They visited the seal in question. Even though it was being fed cuttlefish, its breath still had a slightly sweet hint. Such is our strange world.

Later they give me an insight into the creation of a perfume called “Viking”. When Jonathon explained the ingredients of the scent, it became apparent that he’s telling a story. There was the spruce of the of their native homelands, the moss of the damp rocks, the leather of their harnesses and the list went on and so did the image growing in detailed image in my head. Jonathon made the comment that, “you can see the vikings preparing to set sail across the oceans”. Much to my surprise, on the following day, when a friend of mine sampled the scent, she made exactly the same remark.

The sense of smell often plays an important roll in memory recall. It can invoke memories thought long lost, with such clarity. So too, it seems that it can also create new stories.

I can say now, that Jonathon and Gabrielle have opened my eyes, or is it nose, to understand and appreciate the art of perfumery and had my sense of story telling expanded.